Posted by kluangman at Thursday, April 19, 2012 No comments:

SHAH ALAM: Jati has extended its invitation to the Chinese and Indian community in the country to join the non-governmental organisation.
The NGO's president and former executive councillor Datuk Dr Hasan Ali said non-Muslims and non-Malays were welcomed to join his newly found group as long as they championed Jati's principles.
"We do not discriminate against anyone. We only want prosperity for all.
"Of course, by joining Jati, you will have to defend Islam, uphold the Malays and champion constitutional monarchy," he told reporters at the launch of Jati central on Tuesday at the Shah Alam Convention Centre.
On another matter, when asked if he was going to meet PAS party members, who he had described as 'parasites', Dr Hasan said he did not see a need to do so.
"I do not think that's necessary anymore," he said, adding that his roadshow on exposing these parasites was not related to Jati.
Jati, a new non-governmental organisation championing Islam, wants to abstain from politics.
Its founder Datuk Dr Hasan Ali said the movement wanted to champion three causes Islam, the royalty and Malays.
He said Jati would complement other like-minded movements, such as Perkasa.
At a pre-launch press conference, Dr Hasan said Jati an abbreviation for Jalur Tiga (Three Stripes representing Islam, Malays and the royalty) would be moderate.
Dr Hasan was sacked from PAS on Jan 8 for making statements detrimental to the party.
Posted by kluangman at Thursday, April 19, 2012 No comments:

For my own record.. 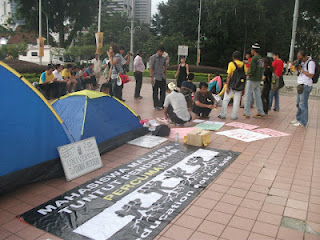