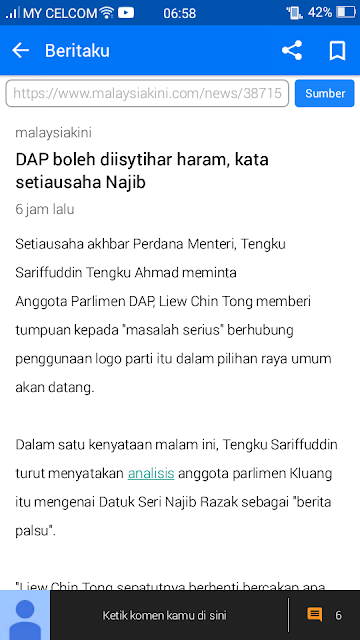 1.      Liew Chin Tong should stop pushing what is obviously fake news, smears and outright lies about the Government. He should be more concerned about the serious predicament of his party, DAP.

2.      DAP do not know whether they will be allowed to use their infamous rocket logo in the coming general election. And the Registry of Societies does not currently recognise the validity of DAP’s Central Executive Committee. This is because DAP's party elections are alleged to be gerrymandered and an undemocratic fix up by Penang Official 1 and his father to perpetuate that family's half-century long dictatorship over DAP.

3.      This means that DAP’s Secretary General, Penang Official 1, is in no position to authorise anything in the party as he is not legally recognised. In fact, DAP’s entire leadership is under threat and could be declared illegal for their alleged election manipulation.

4.      The best Liew Chin Tong and his colleagues could do for DAP members would be to:

a)      Ask Penang Official 1 to resign, instead of displaying contempt for elected office by staying as chief minister despite facing multiple corruption charges;

b)      Ask Lim Kit Siang to retire after half a century of failed dictatorship;

c)      Ask Tan Seng Giaw, a long-serving MP with more concern for the people's welfare than for his own personal power, to take over the party leadership.

5.      If Liew Chin Tong refuses, he should just keep quiet and refrain from parroting the tired old smears of a tired old dictator. We are now in the 21st Century. Dictators are relics of the past – although the opposition, even though it claims to speak for democracy, now has not one but two dictators leading it.