BEIJING, Aug 19 (Reuters) - As US Vice President Joe Biden built trust with China in Beijing's corridors of power, goodwill between the two nations unravelled Thursday night on a nearby basketball court, where players traded kicks and punches and even a chair was thrown. 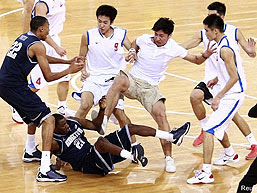 A "friendship" game between Washington's Georgetown Hoyas and Chinese professional side the Bayi Military Rockets erupted into a brawl as the match wound down at Beijing's Olympic Stadium. It was unclear what triggered the fighting.
Players exchanged blows, someone in the crowd flung a chair, and fans tossed full water bottles at the Hoyas players and coaches as they headed to the locker room, writing off the rest of the game.
In China, state media did not report on the incident and microblogs were mostly silent as censors worked quickly to delete any references to the fight.
"Even the news about the fight between the Chinese and U.S. basketball teams needs to be cut," said a microblogger named Yinnu.